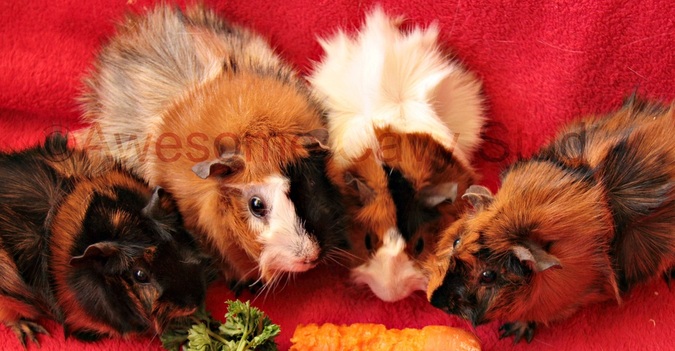 The Abyssinian cavy is one of the most popular and recognisable breeds. They can be any color in the guinea pig rainbow. The difference between Abyssinian and other breeds of cavy is the coat texture and growth pattern. Most obvious is their rows of rosettes. This is the name given to the spirals or swirls on their body. A pure Abyssinian should have 8 rosettes (four in a line across the back and four across the rump) and two optional shoulder rosettes. The edges of the rosettes should be "crisp" or look like an easily defined line. The rosettes should be symmetrically placed along the body (though this is only for show-able cavies and unimportant for condition standard/pets). As "coarse-coats" the coat texture is "rough".

Abyssinians love attention and have the BIGGEST personalities. I strongly suggest this breed to any first-time cavy owners. Abyssinians have a tendency to be friendlier and cheekier and a bit more mischievous than other breeds, in my opinion. There is no scientific or recorded proof of this, it is only what breeders and owners (and myself) have to say.

The name "Abyssinian" confuses most, as they are were never from Abyssinina (which is the old name for Ethiopia) and share no resemblance to an Abyssinian cat. All domesticated cavies are from South America, spefically Peru and Patagonia. The first cavies to reach Europe were in the sixteenth century and cost a fortune (some say they may have cost a guinea). It is important to note that all guinea pigs are neither from Guinea, nor are they pigs (they are rodents).

Abyssinians aren't known to be any more prone to illness than other guinea pig breeds. They are easy to groom and don't require any special brushing or attention. They like to keep themselves clean. Bathing is only necessary in emergencies, or if the piggy has trouble keeping their hind quarters clean when they get older. I suggest the use of Small Friends cavy-safe animal shampoo. My first (and second) cavy was an Abyssinian, and they are still my favourite breed.